These toys transform easily for little hands but are actually pretty convincing! That is, Servo really does look like a large drill instead of just a transformed robot dog.

They're also better quality than I've come to expect from Playskool Heroes Rescue Bot toys, and I expect them to hold up much longer than the previous similar Rescue Dinobots toys.

This post is for the 2016 Thomas & Friends blind bags available from Target. 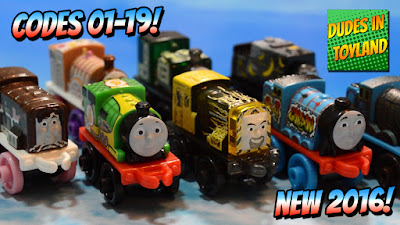 So far, just Thomas MINIS blind bag codes 01 through 19 are been available in the US, mostly at Target.

As always, use at your own risk and let us know in the comments if you get something different from us. I'll update this space as the new blind bags come out.
at 2:16 PM 1 comment: